Welcome to Blogmas Day 6, and today I have another guest post for you!! Winteroseca is a long-time blogging friend of mine, and something we’ve always enjoyed talking about is our multi-cultural experiences from travelling and living in different places. She has very kindly sent in a really cool blog post about Christmas traditions and experiences around the world so without further ado, here is her post! I hope you enjoy it!!

I am a Third Culture Kid, which means that before I was 18, I lived in countries other
than one of my parents’ nationalities. I have lived in France, Switzerland, the UK, the
USA, and now I’m currently in Canada. People ask me what Christmas traditions have I
picked up from my life of diverse cultural exposure? Read on to find out!

I was too young to remember living in France, but my parents still taught me French
culture after we moved to the USA. One of my early memories was being confused
about how Santa arrived with presents. In France, when Santa brings presents on
Christmas Eve, he arrives on a donkey, not a sleigh. As I got older, there are three
French foods that we have had at Christmas, depending on availability and quality
expected.

Bûche de Noël or Yule log, is one of our favourites! France is one of those cultures that
observes the Feast of the Kings on Twelfth Night. A common dessert is the Galette de
Rois. There is no proper English translation for the galette, but you can look it up here:
Galette des Rois: A Sweet French Tradition – FAYLI

I sometimes have the galette for my birthday cake because my birthday falls within the
twelve days of Christmas! When I moved to Canada, I was ecstatic to find authentic
Bûche de Noël and Galette de Rois at a French patisserie! Another food that my family
enjoys is foie gras, but availability depends on where you live. The last time I had foie
gras at Christmas was when I lived in England!

On that note, I have had some memorable food while living in London, England! My
family attempted a Christmas pudding a few times. I loved lighting it and watching the
alcohol burn off! I found it hard to eat though since it’s soaked in so much booze. One
year, my family had a goose for Christmas. It was incredible! Goose fat adds a certain
special flavour to food, and it reminded me of French food. I haven’t had a goose since
leaving England, but I will never forget how incredible it is!

One story that is always told in England around Christmas is the story of the Christmas
Truce of 1914. When World War I started in 1914, the soldiers were all told they would
be home by Christmas. When that didn’t happen, British, French and German soldiers
laid down their weapons and had fun together. This happened all along the Western
Front. The saddest part was all the men who engaged in the truce were censured
severely and the generals tried to cover it up. I personally think it was a beautiful act of
fraternity, peace, love and cultural sensitivity.

I wanted to give an extra special shoutout to an English Christmas tradition: The
Christmas Pantomime. If you are ever in the UK in December or January, see if you can
go to a Christmas panto! I personally recommend the ones at the small theatres rather
than the large ones. The small theatres feel more personal and there is a lot of
audience participation in the Christmas panto. I was part of a community theatre and I
did two Christmas pantos. I played Dick Whittington’s cat when I was 12, which was the
best role I ever had! Makes me feel like Elizabeth Taylor in National Velvet!
A bit of history. The panto originated out of the Commedia dell’Arte, which was a
popular theatre tradition in Europe for 200 years. It really is worth learning about, and
pantos have classic scenes that are right out of the Commedia dell’Arte. For instance,
there is the cooking scene, and the school scene. Also, the principal boy is played by a
woman and the dame is played by a man.

One thing that my parents and I realized is that colonization of the Americas was
happening at the same time as the Commedia dell’Arte. The Puritans, who were against
the arts for religious reasons, were among the first settlers in what is now the USA. So,
the panto tradition never crossed the Atlantic. My parents and I have had discussions
about whether the panto can become an accepted theatre tradition in the USA. We
have certainly found distinct cultural differences between American and English humour.
I could write an entire post about the panto tradition and this particular historical
significance, but I will stop right here.

I moved to the USA when I was two years old. At the time, my parents didn’t know if we
would ever live in another country again. But what my Mum did was collect Christmas
stories from wherever we travelled and lived and put them in a binder that we would
read every Christmas. We continue to read those stories, even though we have now
lived in five countries. The stories include classics like The Gift of the Magi, to more
current stories.

A few years after we repatriated to the USA after living in London, we decided to go to
Yosemite National Park for Christmas. We arrived there at the Winter Solstice, and
there happened to be a full moon then! That doesn’t happen often. Ansel Adams
photographed a full moon at Yosemite at the Winter Solstice, right when it was over Half
Dome (which is an iconic feature of Yosemite). We had to stay pretty late to see the full
moon over Half Dome. I tried to take a photo, but I didn’t do it justice. The park was
abuzz with people trying to see what Ansel Adams saw when he took his iconic photos. 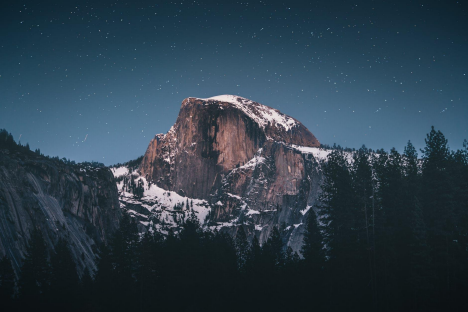 I was in for a couple of Christmas surprises when I moved to Canada. I became a huge
fan of Canadian comedy, and their holiday comedy is cathartic when dealing with
holiday stress. Our political and new satire show This Hour Has 22 Minutes has some
incredible holiday sketches on YouTube. Since Canada has long winters, we have to
have something to keep us entertained. Canadian Christmas comedy is a great way to
decompress. Here’s one of my favourite videos to laugh at Christmas stress: 22
Minutes: Shopping Time is Here (Christmas Song Parody)

Christmas Light displays are hugely popular in Canada as well. I am already getting
notifications about light displays at the zoo, and malls! My city has a river walk that you
can do to see all these light displays. Additionally, they have a site where they list
houses that have light displays that you can walk or drive by to see. Even if it’s not
Christmas, I have noticed there is a real love of light, especially in the winter.

Photo by David Guerrero on Pexels.com

I got to know a lot of Russians while I was living in London. I learned that Russian
Christmas is generally celebrated on January 6th or 7th, depending on the Orthodox
calendar. New Year is more popular in Russia than Christmas though. It used to be on a
different date from January 1st, but then it changed to meet more Western standards.
So, I have heard things about Old New Year, versus New New Year. Additionally, one
Russian saying is that you will spend the New Year the way you meet it (Как Новый год
встретишь, так его и проведешь). Yes, I speak Russian, but that’s not the point.
Because of that saying, Russians have some cultural practices to help them meet the
New Year ready for a fresh start.

You can find this movie called The Irony of Fate, or Enjoy Your Bath! on YouTube. It’s a
Russian New Year comedy made in 1975, and it showcases traditions for Russian New
Year. It has English subtitles, so don’t worry about not understanding it. Although to be
fair, I started watching it when I was first learning Russian, and I was still able to pick up
the story by watching what the actors were doing. Whenever I remember watching the
comedy for New Year, I do so. Plus, I still believe that you do spend the New Year the
way you meet it, although some things you have to take with a grain of salt.

No matter where I am in the world, nothing makes me happier than a white Christmas! I
have always loved snow as a kid and that has never gone away! That’s a Christmas
tradition that is universal for me!

Thanks again Winteroseca for sending in a guest post for my Blogmas! I always love hearing about Christmas traditions that other people, and other places, have because I think it always gives us a new perspective and helps us appreciate the holiday in a new way. I definitely know pantomimes are a big thing in England haha. What I do love is that food seems to be quite a constant no matter where you are – I find it so amazing how food is such a crucial part of so many of our traditions and celebrations (shows you what we all truly love hey?) but thanks again and I hope you all enjoyed this guest post.

I’ll see you all again tomorrow for the next installment.

Support the blog & leave a tip